Showing posts from June, 2010
Show all

June 30, 2010
The Youth Online Behavior Study for McAfee Conducted online by Harris Interactive from May 4 to May 17, 2010. Today’s youth are online pros who know how to navigate through content, play games, and use communication services. Here’s a picture of their general online usage: • Half of kids surveyed say that they have been using the Internet for five years or more, and 58% consider themselves heavy users who access the Internet six or seven days a week. • Communicating and downloading content are two primary uses of the Internet by young people, but education also plays an important role. Nearly 80% say they use the Web to do research for school assignments. • Gaming is also a popular activity, with 61% of kids saying they play games online, including multiplayer online games. • Social networking is a fast-growing online activity. 81% of 16- to 17-year-olds report having at least one social networking account; this number has grown significantly since 2008. • More than half (53%) of
Post a Comment
Read more

Children 'More Likely To Own A Mobile Phone Than A Book'

June 22, 2010
Children as young as seven are more likely to own a mobile phone than a book, figures show, fuelling fears over a decline in reading. By Graeme Paton , Education Editor  Telegraph.co.uk  Published: 7:01AM BST 26 May 2010 Almost nine-in-10 pupils now have a mobile compared with fewer than three-quarters who have their own books in the home, it was disclosed. The study by the National Literacy Trust suggested a link between regular access to books outside school and high test scores. According to figures, some 80 per cent of children with better than expected reading skills had their own books, compared with just 58 per cent who were below the level expected for their age group. The disclosure follows the publication of a study found that found keeping just 20 books in the home could boost children’s chances of doing well at school. Research led by Nevada University, in the United States, said that children coming from a “bookish home” remained in education for around three years
Post a Comment
Read more

The Best Advice Your Father Ever Gave You!

June 22, 2010
The following are the responses I received from my Facebook fan page when I asked,  "What is the best advice your father ever gave you?"  There are a couple of silly responses, but most show deep insight. Hope you find them helpful.  If you have "advice from your father" to add, please post it as a comment. In His, Al There is so much but the one thing i remember and try to pass on to boys, is watch who you hang out with, cause if they get in trouble and you are caught with them weather or not you did the crime you can be punished just by being with them. ummm...men are stupid. LOL I know it's sounds funny, but its true-he used to always tell me that growing up so I would learn to have patience with them when they don't "get it." My father said dont eat yellow snow. Thanks Dad. My father gave me the example of giving. I cannot remember a time where my father was not giving, paying for, or taking care of someone else. If you cant say anythi
1 comment
Read more

Al and Jan's Most Excellent Adventure! 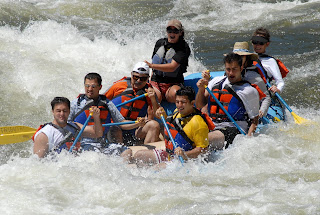 Do you have a “bucket list?”  You know, a list of stuff you want to do before you die?  Well, I just checked off an item from my list.  Jan and I went whitewater rafting on the South Fork of the American River about fifty miles east of Sacramento. Wow, what a rush!  I’ve been on the inner tube ride at LegoLand with my grandsons, but this was a first for me - rafting on a river that wasn’t in a concrete moat.  As we put on our life vests, our 23-year-old guide greeted us with the news that she never flipped a boat but we still need to wear these life vests as a safety precaution. Since she hadn’t flipped in her three years of leading trips I barely paid attention to her instructions.  All I remembered was “face up and head pointed downstream with your feet out of the water. If you find yourself under a raft, push yourself into open water.”  That seemed simple. When we were getting into the boat she mentioned that since they had such a late winter with heavy snows and a very hot summ
Post a Comment
Read more

June 07, 2010
One CEO Takes a Stand  June 7, 2010 Mark Earley for Breakpoint.org Prison Fellowship president  In the never-ending ba ttle of the technological titans, score one for Steve Jobs. No, the CEO of Apple hasn't come out with yet another groundbreaking iProduct, at least not since the iPad. But he's done something even more extraordinary—he's brought good values into the mix. Jobs has made it clear that he wants to keep pornography off Apple products as much as possible. Obviously Apple can't control everything its users do, but it can make porn scarcer on its products, and it has done just that. A British newspaper,  The Guardian,  reports, "So insistent is Apple [on this policy], many magazine publishers developing 'apps' for the new iPad . . . have had to self-censor." As you might expect, this has triggered a frenzy among some critics. Ryan Tate, a writer for the Gawker  website, sniped at Jobs about suppressing his customers' "f
2 comments
Read more

June 04, 2010
MEDIA MEMORY TEST! So you are over 40 and you don’t think you’ve been “brainwashed” by the media!   You may have to change your opinion after taking this test. There are  20  questions in this simple test. The scores increase with your age.   Your teens may not get any correct.   After taking this “test,” ask yourself when you took the time to memorize the answers?   How did they get into your mind?   You probably haven’t even thought about them for decades but they were just sitting in your subconscious mind waiting for the right situation.   The same thing is happening to your kids from today’s entertainment media.   Only instead of vitamins, cereal brands, and sports heroes your children are often being “brainwashed” with perversion, profanity, and (sexual) positions. This “test” may seem silly, but the conclusion is deadly serious. In His, Al Menconi Al Menconi Ministries http://www.almenconi.com/ Al Menconi Ministries Facebook Page Parenting help for the Internet age Chris
1 comment
Read more
More posts