Showing posts from March, 2012
Show all

How should I deal with The Hunger Games? 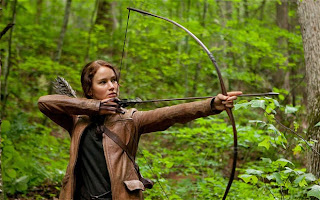 The following is my response to a mother who asked for my insight on The Hunger Games movie/book.  I thought you might find my response helpful.          In His service,  Al Menconi  Dear Glenda, I don't know the specifics of The Hunger Games movie, but I just read The Hunger Games book and thought it was fascinating.  I didn't see anything overtly anti-biblical, considering it is a story about children age 12 to 18 fighting to the death.  The basic story takes place 300 years in the future of North America, and after some unmentioned cataclysmic events there are 12 isolated districts ruled by The Capitol.  To keep the 12 outlying districts in submission, The Capitol makes the 12 districts each randomly select a boy and a girl to represent their district in a fight to the death in a huge jungle type of arena, hence the title of the Movie/book.  It is humbling and demeaning for the districts and a certain death sentence for the children.   The whole event is broadcast liv
21 comments
Read more

March 05, 2012
Want to keep your teen from becoming a drinker? Keep an eye on what movies she’s watching.  If you want to keep your teen from participating in early sexual activity, should you keep an eye on the movies your teen is watching? Research  published online Tuesday at bmj.com finds a correlation between the amount of time a kid spends watching movie scenes that depict drinking and his likelihood to drink himself — and to engage in binge drinking.  The study found that teens who saw the most on-screen alcohol use were twice as likely to start drinking themselves than those who had seen the least. And those heavy viewers were 63 percent more likely than those who’d seen less to move on to binge drinking. Al Menconi Ministries question; if scenes of alcohol drinking in movies can encourage teens to drink earlier, do sex scenes in movies encourage teens to participate in sexual activity at an earlier age.   Researchers interviewed more than 6,500 U.S. teens ages 10 to 14 four times over two y
1 comment
Read more

March 05, 2012
Statistics Advertising's influence on children begins sooner than you may realize. by FocusOnTheFamily .com Children can begin to distinguish brands during their preschool years. Six-month-old babies can visualize corporate logos and mascots, according to the Center for a New American Dream. Brand loyalty begins as early as age 2. The average 3-year-old recognizes 100 different brand logos. Toddlers cannot distinguish a commercial from a television show. The same is true for stories and puzzles versus an advertisement. It isn’t until age 8 that kids begin to realize advertising can be untruthful or misleading. As children take in multitudes of commercials, they learn to place worth in material possessions. As they grow, this materialism can contribute to discontentment, unhappy relationships and drug or alcohol abuse. In 2000, $2 billion was spent on advertising to children in America. By 2008, that figure had increased to $15 billion.  1 One-third of young children have a tel
Post a Comment
Read more

March 05, 2012
San Francisco Chronicle, Posted February 20, 2012 A growing number of tweens and teens, mainly girls, are posting videos on YouTube asking commenters if they’re ugly, according to  Jezebel . Type ‘Am I ugly?’ or ‘Am I pretty’ into the YouTube search box and dozens of videos pop up, including one of an 11-year-old girl who poses for the camera, twirling her shoulders, smiling big, and pulling her long hair out of a pony tail. “Hi guys,” she says. “I was doing a video because I’m bored and stuff. Do you guys think I’m pretty?” “If you think I’m pretty comment down there,” she adds, pointing to the bottom of the screen. “I really don’t care but I just want you guys’s opinion.” It’s heartbreaking to watch these young vulnerable kids share their most personal insecurities. One skinny 12-year-old girl says in a video, “I think I’m ugly and fat…so I just want to know what you think.” And while some commenters tell the girls that they’re beautiful, many call them ugly and use lewd language. Th
Post a Comment
Read more

A Miscarriage of Justice?

March 05, 2012
Dr. Michael Merzenich  Feb 23, 2012 posted in his blog "On the Brain with Dr Michael Merzenich" I was dismayed by the recent 9th Circuit Federal Court of Appeals rejection of a California law requiring that violent video games be labelled, with their purchase being limited to individuals over the age of 18. [You can read the court's Opinion by going to the 9th Circuit website.] What I most strongly objected to was the judges’ conclusion that no definite relationship has been established between violent games and the behavior of young game-players — arguing, in a sense, that what a child sees and does has no demonstrated negative impact on what that child IS. Judges Callahan, Kozinski and Thomas, be it known that this is equivalent, scientifically, to a rejection of Darwinism. How can these judicial authorities (who above all others should have developed an understanding about the origins of aberrant human behaviors) NOT understand that the child’s culturally-driven brain
Post a Comment
Read more
More posts